What is dosimetry? Dosimetry is the process of measuring radiation. Multiple instruments are available that detect and measure the presence of radiation found in a laboratory, handheld, or worn, like a dosimeter badge or ring from RadiationSafety.com.

When ionizing radiation loosens electrons, phosphor crystals in a dosimeter or dosimetry badge capture and store them. When those crystals are exposed to heat, they emit light as the electrons are released from the crystals, which illuminates a light on a dosimeter badge, band, or ring. That light is later measured and processed to provide an accurate amount of radiation to which the dosimeter was exposed. When the dosimeter badge, band, or ring is worn over a period of time, anywhere from one to three months, the crystals can then be used to determine how much exposure the wearer has had over that time period. This process is known as dosimetry. 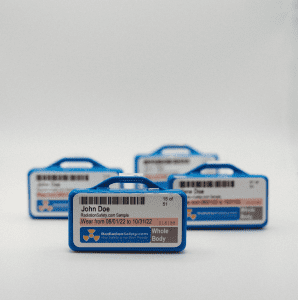 A TLD dosimeter, or thermoluminescent dosimeter, is a passive radiation dosimeter and works by measuring ionizing radiation. Ionizing radiation is caused by X-rays, gamma rays, beta particles, alpha particles, and other radioactive isotopes that carry enough energy to free electrons from their orbit around normally stable molecules. While this can cause damage to cells in living tissue, it also can be captured and measured in a well-designed environment, like in a dosimetry badge. In addition, ionizing radiation causes damage over time, so it is essential to monitor, limit and control how much a person is exposed to.

Invented by Professor Farringon Daniels of the University of Wisconsin-Madison in 1954, the TLD dosimeter requires heat to function. They are most useful for situations where information about radiation amounts needs to be precise but is not required immediately. TLD dosimeters can measure accumulated dosages to monitor potential health impact.

As previously mentioned, TLD dosimeters are passive dosimeters, meaning they can operate without any external energy source and do not immediately provide radiation dosage readouts. Active dosimeters, on the other hand, require power and energy to operate and can be read in real-time. Some of our competitors offer an active dosimeter that a high failure rate. When purchasing, get in writing what is their published failure rate for their dosimeter.

Pros and Cons of TLD Dosimeters

RadationSafety.com provides radiation badges and rings that are affordable and discreet. They utilize optically stimulated luminescence OSL technology, which is a more advanced technology than TLD dosimeters. OSL dosimeter badges are the industry standard used by the government, hospitals, labs, and companies around the world. An OSL dosimeter works similarly to a TLD dosimeter, but an OSL dosimeter only requires optical stimulation, whereas a TLD dosimeter requires heat in order to function. These small and discrete radiation badges can be worn on your lapel and are designed to detect X-rays, gamma radiation, beta particles, and neutron radiation.

What is OSL Dosimetry?

RadiationSafety.com utilizes OSL dosimetry in its radiation detection badges. OSL is optically stimulated luminescence; dosimetry is used to measure ionizing radiation dosages. It allows for measuring exposure to radioactive isotopes over a specific time. Many agree that OSL dosimetry is a better alternative to thermoluminescent dosimeter (TLD) technology.

OSL dosimeter badges are the industry standard used by the government, hospitals, labs, and companies worldwide. An OSL dosimeter is a passive form of radiation detection and requires optical stimulation to function. These small and discrete personal radiation badges detect X-rays, gamma radiation, and beta particles.

OSL dosimeters are composed of materials that trap electrons from radioactive isotopes in their defective crystalline structure. Some utilize aluminum oxide (AI203) to absorb and release radioactive energy to precisely measure the radiation dose received. The OSL dosimeters store the electrons until it is released through stimulation. While heat is used to stimulate TLD dosimeters, light stimulates the elements within the OSL dosimeters. The OSL dosimeter then releases the energy stored in the dosimeter as the emitted light is measured. Since they utilize passive technology. The laboratory can read the OSL badge multiple times without a significant fade. OSL dosimeters provide a very high degree of sensitivity and can give an accurate reading as low as 1 mrem for gamma-ray particles and x-ray particles. In addition, OSL dosimeters measure the amount of scatter ionizing radiation for workers. OSL radiation detection badges can also be positioned as an area monitor in the room. Having an area monitor measures the radiation in the environment over a specified period of time.

An OSL dosimeter should be worn on the outside of your clothing, between your neck and abdomen, where the most radiation is likely to be absorbed. Often, the detection badges are attached to lapels or collars of lab coats. Scientists, technicians, researchers, and medical professionals are encouraged to wear them whenever they come in contact with or close to a radiation source, especially over prolonged periods of time. It is especially prudent for pregnant women working in these environments to use and wear radiation detection badges like those from RadiationSafety.com, especially because OSL dosimeters are more sensitive than the comparable TLD dosimeters.

Our OSL radiation detection x-ray badges are shockproof, water resistant, and unaffected by heat. The radiation monitors are durable and simple to use. With OSL technology, badges are re-readable. TLD dosimeters do not have the capability of being read multiple times. A second reading of the radiation dose from an OSL dosimeter may only decrease by as small as one percent difference compared to its first reading. All radiation doses are stored so that if needed, it can be reread years later.